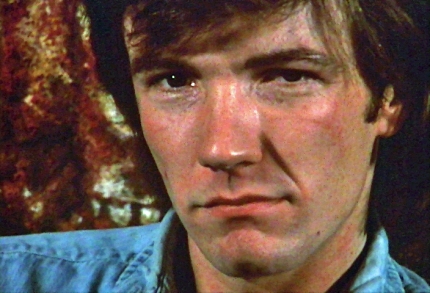 When he was sober, Andy Wilf was a thoughtful, funny, productive painter with unlimited potential for artistic achievement and acclaim. When he wasn’t, he became reckless, dangerous and destructive.

This Jekyll and Hyde schism is boldly illustrated in “Young Turks.” 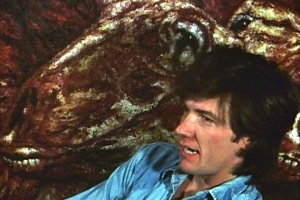 In the documentary — which was filmed in Downtown L.A. between 1977 and 1981 — Wilf is handsome and smiling at a table in front of one of his latest canvases. He eloquently tells artist and filmmaker Stephen Seemayer about the progression of his work from photorealism to expressionism.

“I was incorporating different materials into the paint,” he explains, “looking for something to change the manipulation, to make it less maneuverable, to make it new again for me.”

Intercut with this articulate interview are asides directed straight into the camera in which Wilf agonizes numbly over his substance abuse and futile attempts at rehabilitation.

“I took 50 valiums at 5 milligrams today…” he intones, “and they don’t want me to go to Schick Center, and they want me to pay 8,000 dollars, and I want my sodium pentathol…”

Wilf, who was born and raised in the Los Angeles area, then tells Seemayer of an artist-in-residence gig he landed in 1979 at a university in Yuma, Arizona. “I thought that would kind of help get me squared away, to get away,” he says.

But that attempt to get “squared away” backfired in spectacular fashion, ending in a three-day binge of drinking, abandoning his classes and doing drugs that culminated with Wilf’s dismissal by the university’s dean. In a rage, Wilf threatened the dean, threw a chair through a window and ended up in jail.

“But that isn’t like me at all,” Wilf tells Seemayer in “Young Turks.” “It was because of … all the other chemicals that was [at] maximum input in there. My brain was pretty well out to lunch.”

The heartbreaking truth for Wilf’s friends and admirers was that, despite numerous attempts to overcome his addiction, Wilf was doomed to lose the battle. “His paintings were personal exorcisms,” wrote art critic Hunter Drohojowska in a 1982 issue of L.A. Weekly, “catalogues of his determined ritual of self-destruction.”

Andy Wilf died at 32 of an accidental drug overdose in January 1982, just a few months after the rough cut of “Young Turks” was screened.

If his personality was divided, his body of work was solid. After Wilf’s death, artist Roger Herman told Suzanne Muchnic of the L.A. Times, “He functioned so well on drugs, he didn’t take them to get high, he took them to avoid depression.”

Born Aug. 25, 1949, to Mormon parents in Lynwood, Wilf showed an aptitude for drawing as a young child, an impulse encouraged by his mother, Lucille, who had studied painting at UCLA. He started his art career after high school, working at a factory in Compton that churned out motel-room paintings on a production line.

In 1972, he started using photographs as the basis for his work, which evolved into photorealist portraiture. His “Portrait of John Schroeder” (1975) is a study in exactitude. As Muchnic wrote of Wilf’s photorealist works in 1983, “These paintings of long-haired young men and middle-aged people with leathery faces confront the viewer, their ordinary appearances scrupulously observed by the camera’s unflinching eye.”

By 1978, when he and his wife, Carey Kawaye, had moved into the Victor Clothing building at 240 S. Broadway, Wilf’s style had begun to loosen up a bit. The larger space of his downtown loft allowed him to use bigger and bigger canvases. “Just like the goldfish kind of thing,” Wilf says in “Young Turks,” “bigger bowl, they grow.”

Living next door to Linda Frye Burnham, he also gained access to photographs being sent in to her High Performance magazine, such as those of Hermann Nitsch and Barbara Smith, which Wilf translated into huge paintings with graphic overtones of violence and death.

Canvases such as “Burning Desire,” an interpretation of Seemayer’s performance behind a mask on fire, and “Bound Figure,” in which Rudolf Schwarzkogler’s prone body is shrouded in strips of gauzy cloth, depict “cropped, large, terrifying figures, easily readable but with painterly surfaces,” Muchnic wrote.

Wilf’s expressionism reached its zenith with a series of paintings inspired by the butcher shops of Grand Central Market, across the street from his downtown loft. In paintings such as “Dead Ends,” lifeless eyes in bloody piles of pig snouts and calves’ heads stare at the viewer with both astonishment and accusation. As Patt Morrison of The Times wrote in an obituary of Wilf in 1982, these are “choice cuts sliced out and the offal tossed aside, a metaphor for the castoffs of human greed.”

“Dead Ends” was shown in 1983 at the Los Angeles County Museum of Art, which two years earlier had honored Wilf with the Young Talent Purchase Award. In a program for the 1983 exhibit of Wilf’s work at LACMA, curator Maurice Tuchman wrote of the awards ceremony, “When his name was announced at the prize reception, tumultuous applause broke out among the scores of artists present. In the degree of its intensity, this response, virtually unprecedented in my experience, both reflected the artist’s own volatile and highly emotional nature and clearly revealed his charismatic effect on others.”

In her appreciation after his death, Muchnic reported that, “Wilf later confided to friends that he took the $3,000 awarded him and ‘shot it up my arm.’ “

For his last painting, as Morrison wrote in the Times obit, “Andrew Wilf painted something else he saw — himself, as a shadow figure sitting at a drug-strewn table. ‘Peace Through Chemistry,’ he had entitled it.”